Last Friday we received notice from Homeland Security to get our fingerprints taken for our I800A application – approval by the USA for us to adopt. Our actual appointment wasn’t until May 8th, but St. Louis allows you to walk in whenever to get fingerprinted. So, alarm set for 5:30 AM, rolling out of bed at 6 AM, and finally we’re all in the car around 6:40 AM. So typical of me. I was so anxious on the drive to St. Louis. I told George I felt nauseous I was so anxious. It’s all becoming more real that this is happening and it’s 1 step closer to getting our baby home! We found the building relatively easily and then realized the only parking was across the street for $8!!! Between George and I we were able to get the money together. (In hindsight we both wished we would’ve taken turns driving around, but then again, gas isn’t cheap these days either.) There was only 1 family ahead of us – they looked like they were from India. I thought Lucy was going to ask them something silly, because that’s just what she does, but she was very shy. We were in and out within 20 minutes and I never threw up. Immediately the anxiety was gone once we walked out the door. I get so mad when I get anxious like this and with flying. It’s unrealistic and dumb, but it overwhelms me. Lucy was not happy that we had to give back our visitor stickers when we were exiting. She asked the security guy “Why?” and I think he just grunted. All of the guards have straight faces on. I wonder what they’re like in “real life”.

So, what do you do in St. Louis at 9 AM then? Go to the zoo!!! We had a great time. It’s an amazing zoo and the animals have really large spaces to roam in compared to many other zoos I’ve been to. It was cool outside and there were very few people there. In an out of everywhere we wanted to go in 1 1/2 hours! We were most entertained by the penguins who all came up to the glass and were staring back at Lucy and later when the penguins splashed us all. Do I smell like fish? It’s amazing how uncoordinated the penguins are on the ground and then to watch them jump in the water and it looks like they’re flying. Our other entertaining part was the orangutan exhibit. They all had their own blankets and would drag them around with their toes. The oldest one looked like a furry beast. It came down to the glass where we were, picked up the banana off the ground and ate out the inside. Just as I said “Look! He knows not to eat the peel!”, he stuffed that into his mouth too. One of our other favorites is the butterfly house. There are hundreds of butterflies flying around. Almost like a fairy world. I asked the guy working how long they live and he said some have lived in there for 6 months and other live only 1 day, depending on the species.

So, here are some pics from the zoo!

George and Lucy outside of the Insect House and Butterfly House

Me and my oldest baby Lucy 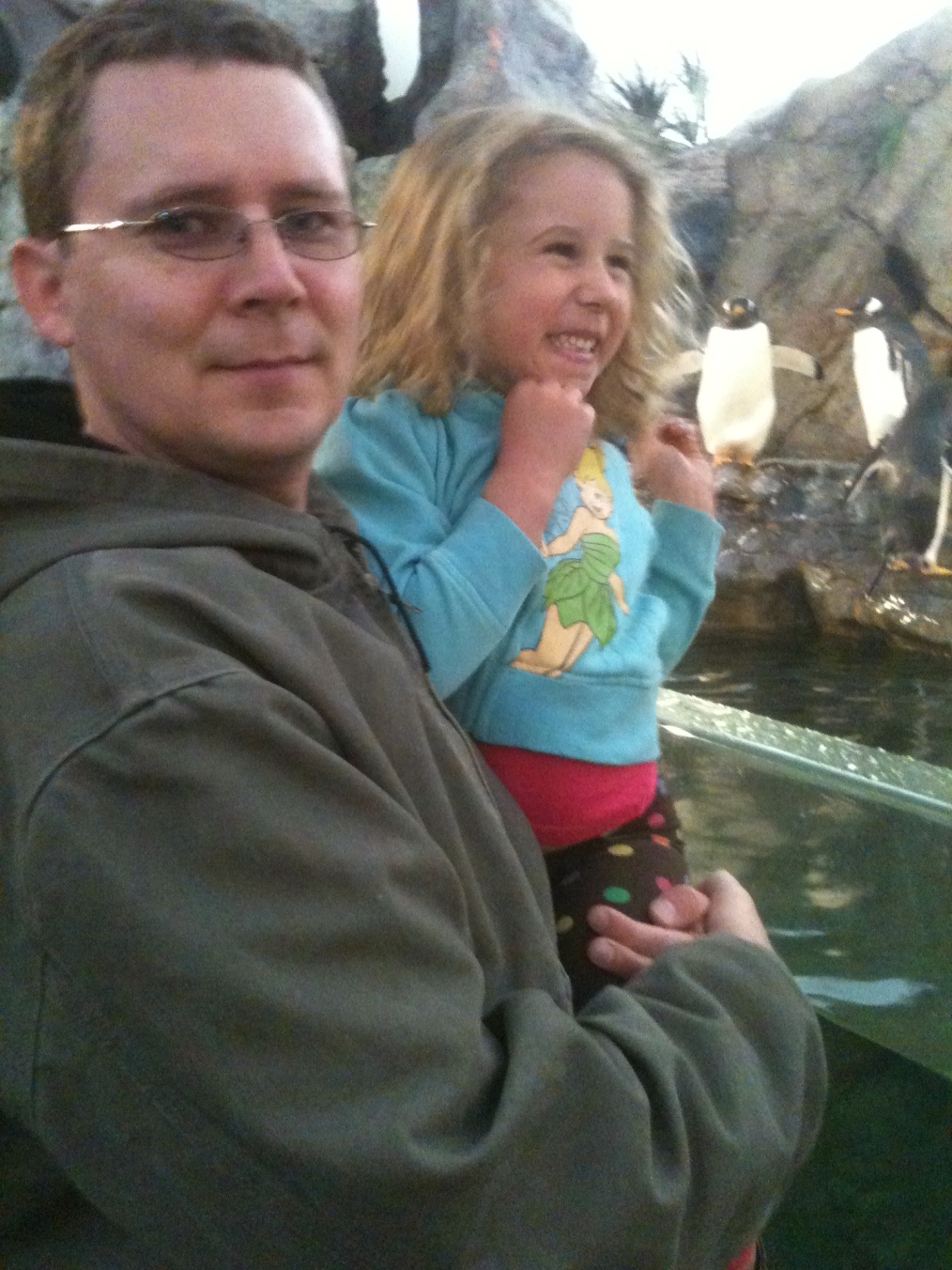 George and Lucy at the penguins!! There were hardly any other people around and it felt like we were having our own party. Lucy said “It’s like Happy Feet!!”

Lucy slept the whole way home. Ok, I admit I did too. When we pulled up the exit to our house, Lucy asked “How did you get to Springfield Daddy?” She made us laugh a few minutes later at the gas station. I don’t know why, but it seems like anyone playing loud rap music will sit there with the door open for a few minutes before turning their car off so we can all hear it. After someone beside us did this, Lucy said to me “That’s silly music!” She loves when I rap though. Maybe because it’s so terrible??? 🙂 Or maybe it’s songs like “I’m gonna eat the bun bun bun with my burger burger burger cuz it’s yum yum yum for my my tummy tum tummy”.